In an XML element names are user defined and there could arise conflicts. One possible scenario is, consider a WSDL in which a message consists of parts referencing elements, with the same name but from different XSDs. For example, consider below code that is snipped from a WSDL (though not valid due to no namespace references). Here the requestMessage has two parts one refers to ID from employee schema imported from EmpRequest.xsd and another part refers to an ID from salary schema imported from SalRequest.xsd. But there is no logical relation between elements in the part and the referenced schema document. 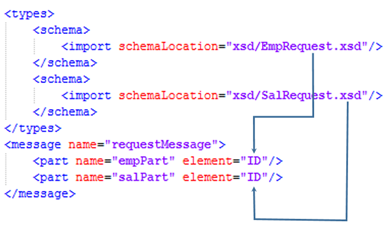 In XML family language there are three types of namespaces – targetNamespace, xmlns (read as namespace) and default namespace.

By connecting xmlns and targetNamespace parser validates each of the element present in the XML. Therefore, it is good practice to have elements always prefixed by its corresponding xmlns qualifier. Below figure 4 shows a sample input file that is used to invoke execute operation in the WSDL shown in figure 3.

Root element has xmlns attribute pointing to the input schema XSD with targetNamespace http://www.clarityconsulting.com/trng/helloworld/xsd/Request. Please note that this not the targetNamespace of the XSD and not WSDL. Parser validates the input elements against the definition of types in XSD.

If there are elements in an XML without a qualifier prefix, parser climbs up to its parents’, grandparents’ and great grandparents’ nodes till it finds a default namespace. 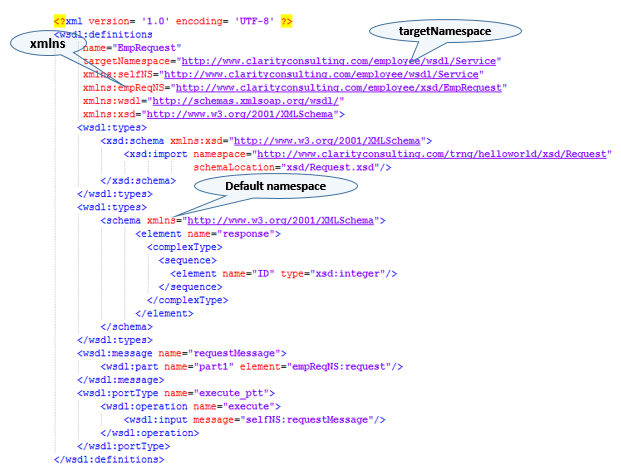