In the world of integration applications, we have been hearing about webservices mainly of types REST and SOAP. In general, a SOAP webservice publishes its definition file with WSDL (Webservice definition language) extension that belongs to XML (Extensible Markup Language) family. A typical webservice definition file contains details about services/operations, input & output definitions of these operations along with the network addresses. The input and output definitions are part of the WSDL and belong to XML family. As they are of family XML and defines a specific format, these files, if stored separately, uses XSD (XML schema definition) extension. In this post we will discuss basics of XML and XSD that are needed to work with webservices.

To consume a service defined in a webservice, users should have its definition WSDL file. While consuming the service, the input file has to follow the format defined by XSD inside the WSDL. Therefore, input XML, XSD and WSDL belong to XML family and the dependency moves in the direction of WSDL to XSD to XML. We will discuss about WSDL in detail in the next post. Any XML document should be well-formed in the sense every node should be closed properly. The nodes could be of type simple or complex. Complex node is a combination of a set of either simple or simple and complex nodes.

Usually in context of webservices input or output XMLs are well-formed and should be valid against the XSD definition. XMLs are created as per the definition provided by XSD file, that contains definition of simple and complex elements, their attributes and restrictions. To understand the relation between an XML and XSD consider a webservice that accepts as shown in below figure. 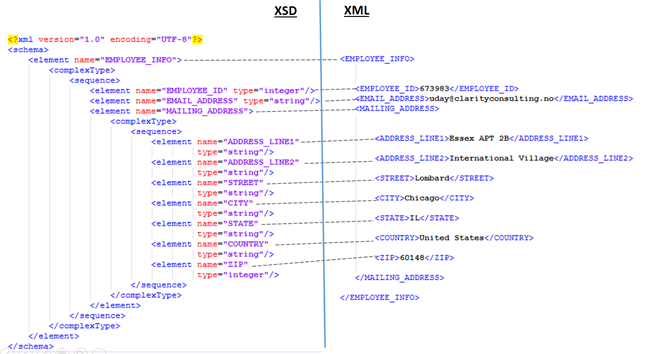 In this example inside XSD content the first node contains process instructions. Employee Information (EMPLOYEE_INFO) is a complex element of child elements – EMPLOYEE_ID, EMAIL_ADDRESS and MAIL_ADDRESS as input. Here MAIL_ADDRESS is another complex element containing further child elements. Each of these tags have proper logical closure, and therefore this XSD is well-formed. If you observer the element with name attribute equal to EMPLOYEE_ID, this element defines the data type to be an integer forcing the input XML defined over this XSD should have an integer value for element EMPLOYEE_ID.

Here the input XML on the right side of above figure is created based on the definition of XSD. As you can observe it is a well-formed document. In addition, this input XML document contains simple and complex elements with appropriate data types as forced by the XSD document. Therefore, this is a valid XML against the XSD document. We will discuss about WSDL in details in our next post.